The best of all worlds! Canadian production at BeMe Theatre. Munich… Oh the reality. What exactly is that? Or better yet – where exactly?

John Mighton answers this question in Possible Worlds with “everywhere and nowhere”. Real is what seems real. Reality is everywhere, and wherever we decide it to be. At this time, however, reality is at the BeMe Theatre at Einstein, where a Canadian theatre company, Talk Is Free, from Ontario is visiting. Under the direction of Mitchell Cushman, the wonderful Canadian English language Possible Worlds is performed as a Science Fiction drama. That is if you wish it to be so. Scene one: George Barber (Alex Poch-Goldin) was murdered, his brain was cold bloodedly removed from his head. But, in the next scene George Barber meets the beautiful neurologist Joyce (Colombe Demers). Then in the next scene, however, that same neurologist becomes a legal court assistant. But in the scene following she is the loving wife. Between all these scenes the two policemen are frustrated when trying to solve the murder of George and visiting the laboratory of an eccentric brain surgeon. One understands quickly that logic and chronology play no role here. In Possible Worldsseveral different ways of life are layered on one another, to depict what could happen if one or the other way took place. George is the only one who is aware of the time he is in and develops a neurosis, which is understandable – his only companion through all the worlds is the bloodied sheet under which he lays dead at the beginning of the play. Director Cushman gives fair consideration to each of the worlds and each seems accurate in its telling. But the world the audience will love the best is when George and Joyce are deeply in love, as in the alternative to their death. Canadian actors work in the North American naturalism tradition, and are solid throughout. Especially effective are the two leading actors Alex Poch-Goldin and Colombe Demers who engage the audience of this film-like play with total ease, despite the difficulty of their assignments. In the cellar of the BeMe Theatre they bring an intimacy and closeness to the production. Christiane Lutz, Süddeutsche Zeitung October 10, 2013The Süddeutsche Zeitung, published in Munich, is the largest German national subscription daily newspaper. It is read throughout Germany by 1.1 million readers daily and boasts a relatively high circulation abroad. 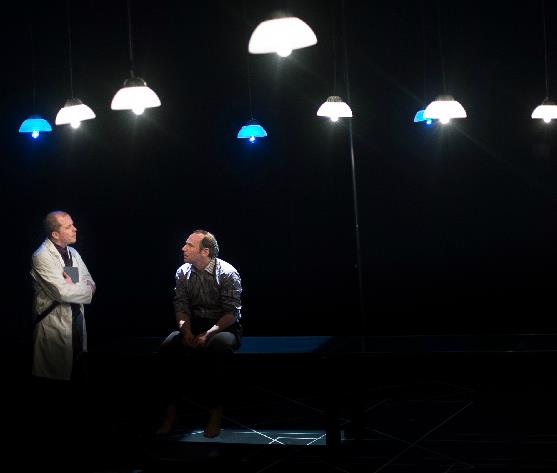 Christopher Stanton and Alex Poch-Goldin
BeMe Theatre is a Munich-based professional English-language theatre company. They concentrate on producing theatre which is cutting-edge and cross-cultural, outward- and forward-looking. They use international texts, guest artists, design and developmental processes which cross borders both culturally and artistically. Find out more by visiting their website here.

Eric McCormack and Chilina Kennedy star in a one night only event to help support local restaurants and retailers across Simcoe County.

STAY CONNECTED WITH US!