Talk Is Free Theatre to Take Over Barrie with Roving, City-Wide Production of The Music Man 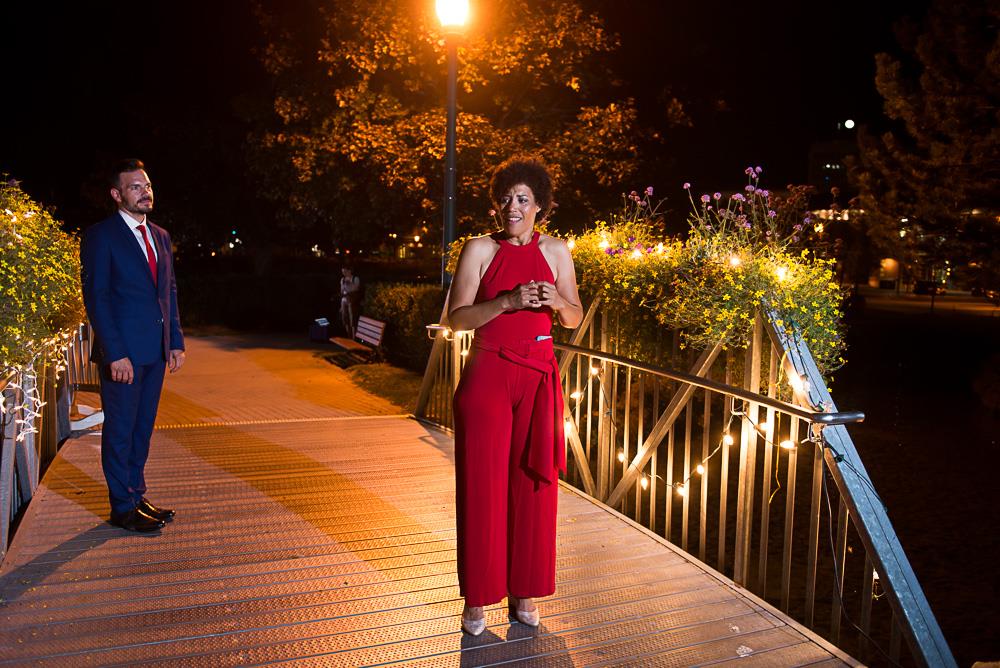 Barrie, ON – Talk Is Free Theatre (TIFT) will convert downtown Barrie into the song & dance filled streets of River City, Iowa in its upcoming rendition of Meredith Willson’s The Music Man, Sept. 14 to Oct. 2, 2016.

During this revolutionary, immersive production, audiences will be whisked from one city site to the next to witness the witty & whimsical tale as its cast marches through town amongst unsuspecting Barrie residents.

“I never dreamed I would produce The Music Man. I respected its rightfully iconic status – but it was not my favourite show. And I always begrudged it getting the Tony Award over West Side Story in ’57!” laughs Arkady Spivak, TIFT Artistic Producer and originator of The Music Man’s staging concept. “A chance reading of the libretto, however, opened my eyes to what marvelous material it actually was. Composer Meredith Willson’s first & most successful musical, written as an ode to his hometown of Mason City, Iowa, brings audiences back to a simpler, cherished time for small-town America. At its core, this story of romance and redemption is about community transformation; I wanted to stage it in a way that would transform a community.”

The Music Man follows dashing con man “Professor” Harold Hill, who travels from place to place promising to train a marching band of local boys, if the naïve townsfolk purchase his instruments and uniforms. Not an actual music teacher, Hill’s swindle is to skip town as soon as the instruments are paid for. The charismatic hustler gets more than he bargained for in ‘River City’, however, when he finds himself falling for the local librarian. The beloved musical unfolds through a series of rousing marches, barbershop quartets, and heartwarming ballads, including Seventy-Six Trombones, Shipoopi, Ya Got Trouble, and Till There Was You.

In TIFT’s rendition of The Music Man, audiences will journey first via chartered bus and later on foot to locations within a close vicinity throughout Barrie corresponding with settings in the play: the library, city hall, picturesque parks, and more. The promenade’s climax will ultimately lead audiences to Barrie’s own iconic public art piece: Rob Baird’s The Spirit Catcher sculpture.

TIFT’s outdoor, roving production, with more than 60 participants, marks the company’s largest undertaking and promises to be one of biggest presentations in Canadian theatre history. With the sheer size of the project, two directors have been recruited to oversee its execution: Jennifer Stewart (longtime TIFT actor and Director of Best of Enemies at Bluff City Theater in Missouri), and Herbie Barnes (who directed TIFT’s site-specific Tales of an Urban Indian on a moving city transit bus). The creative team is rounded out by Choreographer Amanda Nuttall, and Musical Director Mark Camilleri, as well as Lighting & Scenic Designer Joe Pagnan, and Costume Designer Lindsay Dagger Junkin.

The whole city of Barrie will come together for this one-of-a-kind presentation, with Mayor Jeff Lehman set to officially proclaim the renaming of Barrie to River City for the occasion. The ensemble ranging in age, gender, and ethnicity to reflect the city’s diversity will also feature notable community members. Among these locals, singer & TV host Glenn Coulson will form part of the show’s Barbershop Quartet – reprising his role in the 2003 Matthew Broderick film adaptation!

Following The Music Man’s opening in 1957, the New York Times exclaimed that Meredith Willson, ”translated the thump and razzle-dazzle of brass-band lore into a warm and genial cartoon of American life.” Nearly 60 years since its premiere and subsequent lengthy Broadway run, the ubiquitous musical has been revived countless times the world over – with TIFT’s upcoming presentation soon to join the ranks of The Music Man’s most historical stagings.