Founded in 2003 in Barrie by Artistic Producer Arkady Spivak and colleagues, TIFT has produced more than 100 works.

The company develops and produces a wide range of work from the periphery of the mainstream, concentrating on new writing, neglected classics and drastic re-examinations of established repertoire. TIFT’s programming emphasizes the development and production of off-centre, story-driven musicals and new types of site-specific, immersive creation, among others.

The company recently undertook one of the boldest and largest immersive experiences in Canadian theatre history.  The Curious Voyage was a 3-day long journey, which began in Barrie, Canada and took the audience, quite literally, to London, UK. This was an unprecedented endeavour that garnered national accolades and was a major step towards the creation of The WOW Collection, the multi-disciplinary festival of immersive art.

TIFT has produced several world premieres of Canadian musicals including Scenes from the Bathhouse, Variations on a Nervous Breakdown, One Step Forward and Music for the Changing Voice. Other notable productions of musicals include the Canadian premiere of absurdist musical Anyone Can Whistle, a cross-gendered production of Guys and Dolls, site-specific roving production of The Music Man, the world premiere of the American musical Dani Girl, and the rarely seen Floyd Collins (in co-production with Vancouver’s Patrick Street Productions). TIFT’s co-production with Birdland Theatre of Sondheim’s Assassins was a sold-out success, a Dora Mavor Moore Award winner for Best Production of a Musical in 2010 and has been named one of Ten Best Toronto Theatre Shows of the Decade by NOW Magazine. 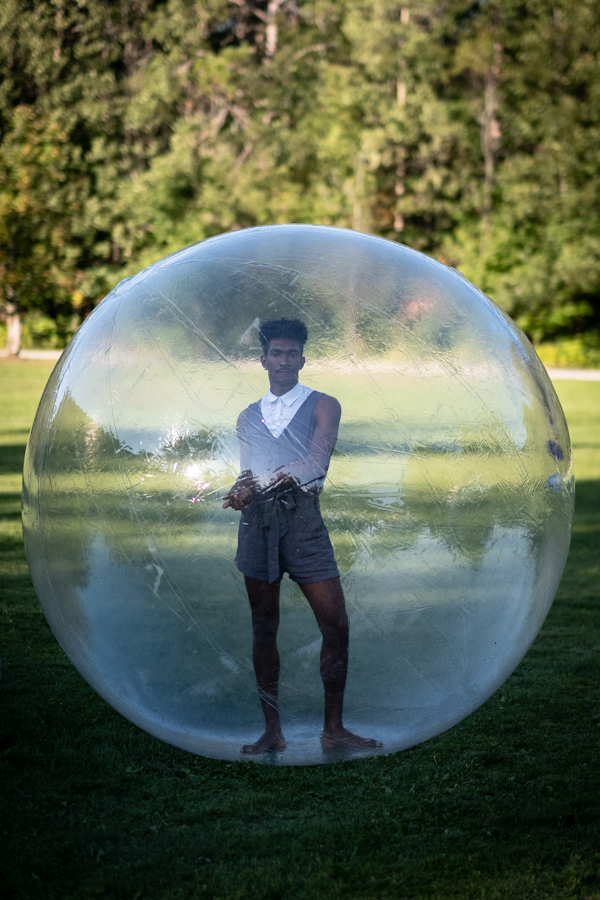 TIFT also tours its productions. Staged on a moving city bus, the company’s production of Tales of an Urban Indian premiered in 2009 and has been on an indefinite tour across Canada, to the United States, and internationally. Tales of an Urban Indian celebrated its 500th performance in Brisbane, Australia in 2019 and was part of Yirramboi Festival, Australia’s premier First Nations arts and cultural event. Other tours include Possible Worlds to Munich, Assassins to The Royal Manitoba Theatre Centre in Winnipeg, The Wedding Party to the National Arts Centre in Ottawa and The Tale of Ivan vs. Ivan to Serbia, England and Russia. In 2020, TIFT toured site-specific productions of Every Brilliant Thing, For Both Resting and Breeding and Tales of an Urban Indian under The Canada Capsule to Adelaide, Australia where Every Brilliant Thing was awarded ‘Best Production’ in the theatre category.

MICHAEL TORONTOW
Artistic Director
‍While pursuing a double-degree program in Biochemistry and Chemical Engineering at the University of Ottawa, Michael began performing with local community theatre groups and realized he was headed down the wrong career path. He smartened up, earned a Bachelor of Arts in Theatre and Arts Administration, and immediately moved to Toronto. After beginning his professional acting career on the US National Tour of Mamma Mia!, Michael returned to Canada to play Link Larkin in the original Canadian company of Hairspray and has been gracing stages from coast to coast ever since.
‍
Michael has performed in and directed several productions with TIFT, including the adventurous The Curious Voyage, the award-winning Every Brilliant Thing, and the critically acclaimed Into the Woods. In 2019, he began working alongside Arkady Spivak in an administrative capacity, taking on more curatorial roles involving season casting and programming. Under the auspices of TIFT and with support from Patrick Street Productions in Vancouver, Michael is also Project Manager and Developer for the forthcoming Canadian Musical Theatre Database, an online platform to champion the production of Canadian creations at home and around the world and foster a more connected national musical theatre community.

ARKADY SPIVAK
Producer and CEO
Arkady Spivak was recently acclaimed as a 2020 Canadian Arts Hero by the Globe and Mail. He founded Talk Is Free Theatre in 2003, which tackles the cross-section of repertoire, in traditional and immersive mediums. Since TIFT's founding, Spivak produced 101 works in Barrie, Canada, and toured nationally and internationally. TIFT won a prestigious Dora Award for its co-production of Assassins. In the fall of 2018, Spivak produced the largest theatre experience in the world, entitled The Curious Voyage. It was the 3-day long journey, in which each patron became the protagonist of their own story, and was transported, quite literally, from Barrie and London, UK. Commissioned by the National Arts Centre, TIFT's COVID artistic response was an imaginary wedding, Something Bubbled Something Blue, in which the party wore human size rideable balls over their formal attires. The work has been viewed on Facebook 1,800,000 times and is now being developed into a long-form narrative engagement.

Spivak has served, a number of times, as a Juror for the Ontario Arts Council, Canada Council for the Arts and for Theatre Ontario’s Professional Theatre Training Program. Spivak is a volunteer mentor for Business and the Arts, working with a number of emerging and small-scale organizations. He’s a recipient of the inaugural Barrie Arts Award and Contributions to Tourism Award.